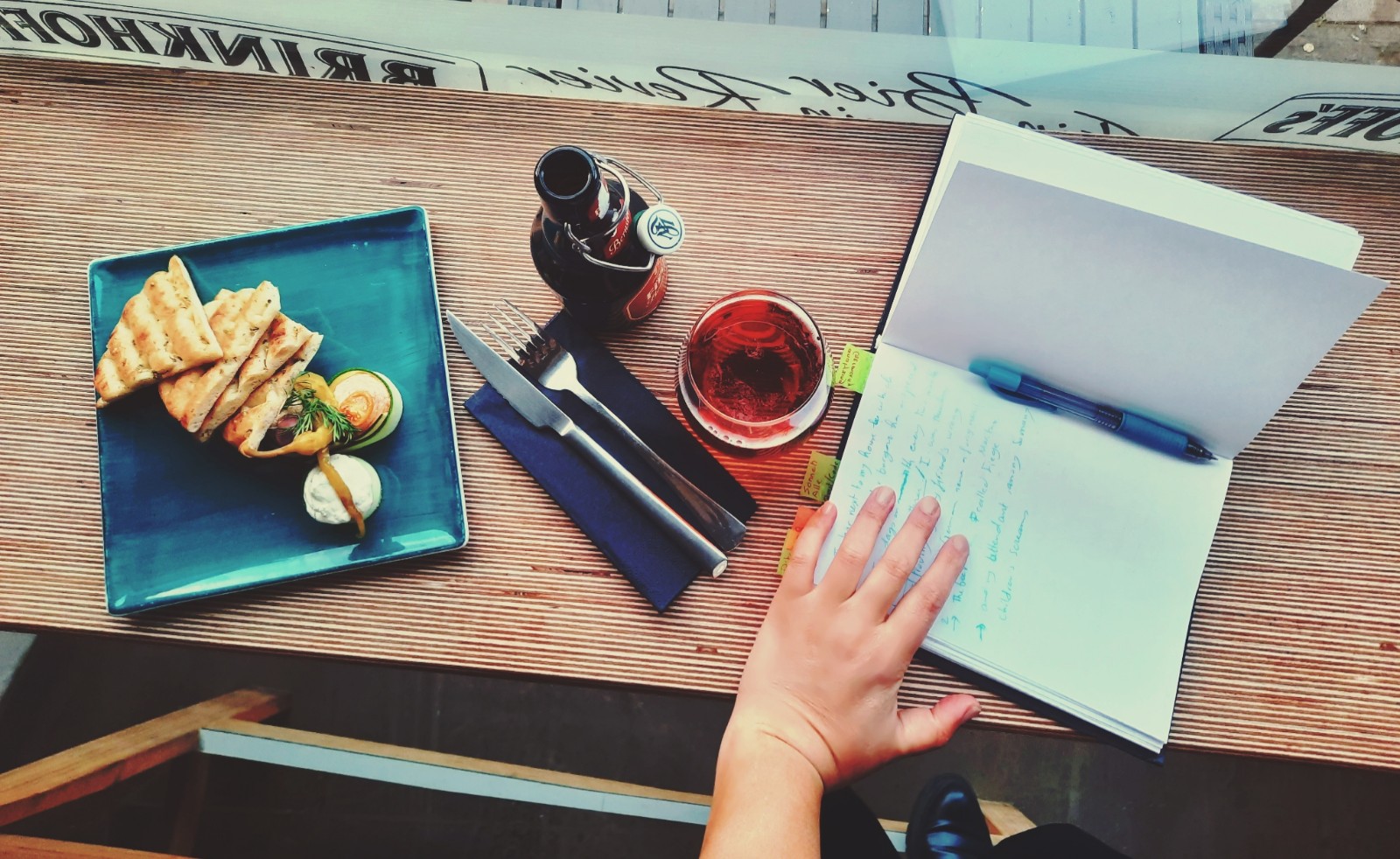 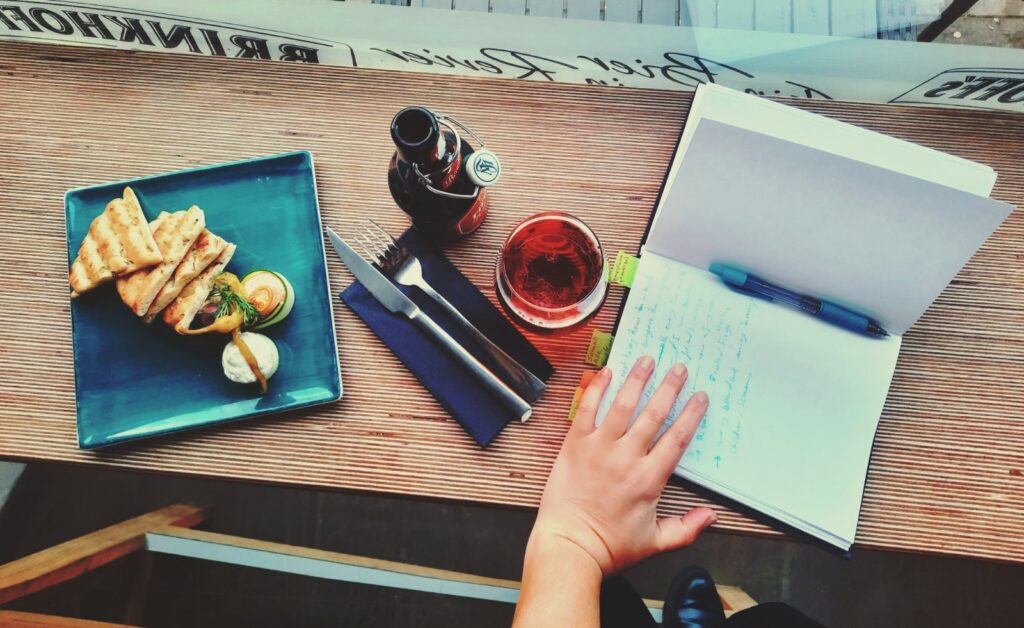 My personal interpretation of the post-trauma stress is “the aftermath of facing the demolition of the world and witnessing the fragility of existence yet simultaneously, and unwillingly, observing the real monstrous human face. Disorder, means it sabotages your perception of the world, and of the humans, and of the existence, and of life.”

I left Berlin while I was still at an“Enchuldegung, welche U-bahn ist aus Alexander platz gehen, bitte?“ level of German language; the verb comes at the end of the sentence and the Germans use a very polite language so we start with “Enchuldegung” and end with “bitte”, those are the things I am sure of.

I used to be a professional traveller for more than twenty-five years, I visited almost 30 countries, and lived in four cities and tens of houses. leaving your “home”, fleeing a war and human destruction, is not like taking a flight ‚traveling‘ away for a vacation or adventure. The destination is vague, the road is more dangerous, the faces are darker, the hearts are heavier, uncertainty and doubts, your degrees are irrelevant, your knowledge of how to roam strange lands is not useful, the two languages you use are not enough, and the ugly face of humanity you once saw in war cannot be unseen, a permanent mental sear.

For all the facts mentioned above, I decide it is wise to wait for my man to come to visit me to determine how I might start my four months of my life in Dortmund as a Stadt-land-text writer, it is his homeland after all.

“Raba, Seriously baby?” His face is frowning in concern on the screen in a video call.

here comes the argument that I am a better person than I really am “you are an intelligent, clever person, go out, walk around, meet people in coffee shops, in nice local bars, meet nice normal couples”

” I know what you don’t know, or maybe you don’t want to know: Humans can’t be trusted! This is a fact”

Eight years of war, the articles of fun facts about the PTSD will not help me, and three years of “auslanding” in Germany, with no tour guide to tell me what to avoid, only added to my mistrust in humans:

“This is prejudice Raba,” my boyfriend says ”do not put all people in such vicious suspicions”

“.. ah!” Says my man as in a moment of Eurekea! “Galleries, visit Galleries, you like art, don’tyou? They have a very strong theater movement in Dortmund,go and check its program, you trust theater, don’tyou? ”

I choose to ignore his language-

Fact check: I indeed love art, I trust art, even more than the people who create the art, far more thanI trust history- which is mostly written by the victorious, and the non-lost.

SO,I shall go out to have a walk around the house, as my man suggested, around the park, in nature, to defuse the stress, watching dogs and kids playing in a faraway world from their attentive concerned parents. Around Bocciaplaygrounds, the Italian Roman game, the corner Indian kiosk-Späti just outside the park. I reach the road, the crossroad, to the other road, where the U-Tower is displaying white digital pigeons as a sign of peace on a background of the Ukrainian flag, Ukrainian war is the most recent human-made catastrophe, as if humans learned nothing of the horrible prices of war, what a surprise!

And hundreds of thousands of Ukrainians are fleeing the “ monstrous human face” again.

And.. what do we have here?

A restaurant with people standing on the counter drinking beer, a burger place called Olafs.

The place is full of locals; to say “locals” is a very pretentious assumption for one do not know for sure but almost always assume- but they seem like they are having fun. Some of them froze for a second watching me watching them from outside.

“This is a chance to prove my boyfriend wrong,” I think to myself.“Go to a local bar he says! Do not be prejudiced, he says!”

Recalling the last bar I went to in Berlin, in Wollank Street, the barman whispered “bye bye, whore” as I paid the bill while my man was still in the restroom.. Later on I discovered from the evaluations and reviews that the two brothers who own the Wollank Street bar for two years now are well reviewed as raciest A@$%^ L-I did not check the reviews beforehand. At that moment in time and space, the barman was still looking straight into my eyes with a wicked smile and a sparkle in his eyes, with no witnesses and no one to tell. I had to swallow the insult and wear my smile- for my man is so dear to me to upset him, every time, with what I know of the human heart!

Now, in this place of locals in Dortmund, I will enter with head held high; if they mistreat me I will be more than happy to make a scene, with witnesses this time- and to prove my boyfriend wrong: “Do not be prejudiced, he says!”

The beer was a local Moritz Fiege, a golden amber beer recommended by the young polite attendant.

Smiling he explains that the Hamburger place,today, on a once-every-three-months occasion, is hosting “from around the world cuisine,” and for my good luck today’s cuisine is from Greece!

“The reservation was closed after twenty minutes of the announcement,”, my nice bartender proudly declares, almost screaming in an attempt to be heard over the screams of the children. I look around: the parents are running with scarf and tiny hats in their hands, around the tables, behind the screaming children, the colorful little jackets beneath the benches under the chairs and on the floor.

I see the Shawarma, our Syrian Shawarma which is not Syrian but Turkish, its Turkish name meant “to turn” and in Armenia is Terna: “to turn“, then it is the Greek Gyros,

Olaf’s Gyros, is the Arabic/Turkish Shawarma, and the Armenian Terna..

Only if humans could move and adapt like the food does. Our dishes have a better life than us.. my guess is our stomach has no ego like our brains do.

I order the pita bread to accompany the Tzatziki: Greek yogurt wrapped in cucumber: “Nojoumiah”, which translates to “full of stars”, as we call it in my home town, the lazy Mediterranean city of Lattakia, or Laodicea as the old Greeks called it.

and now, the cold light Fiege beer is a blessing.

Looking outside the glass storefront – as the frightened and anxious foreigner I am- I start to count the adults who went outside for one last cigarette before they go: one white man, two white men, three white men, one white woman, one brown woman, looking inside to a brown man, smiling towards one white man, one kid running outside followed by one dad carrying a red hood and a small colorful jacket in his hand, one proud mother behind, the kid and I lock eyes for a second, thus the father smiles, the mother looks at me and smiles, I take a couple of minutes to remember to smile back, they are already walking away, I am smiling to no one now.

The dad is still trying to convince the kid to wear her jacket but managed to place the hat on her tiny head with two ponytails.

‚How many beautiful moments one can miss trying to protect-in order to heal- one’s inner wounds!‚ I dare to ask myself

The digital pigeons on the U-tower seem brighter now as the sky darkens since the time is sliding towards the night.

Share this ArticleLike this article? Email it to a friend!
Email sent!